A Famine for hearing the Word

Missions banquets are rarely short–especially not in the 1970’s.  So, annually, I would curl up under the table and sleep the evening away.  But somewhere around 1980, the banquet speaker was Stephen Harris, an officer of the USS Pueblo which was captured by the North Koreans in 1968.  Harris and the rest of the 82 sailors on board were imprisoned, accused of being spies, starved, and beaten for 11 months before being released.  But the thing I remember from hearing his story was the hunger he described for having access to the Scriptures, like the prophet Amos speaks of, “A famine for hearing the word of the Lord.”  The men compiled what they referred to as the “Pueblo Bible,” scraps of verses and hymns scraped from their memories, written on toilet paper, and passed secretly among the crew.

That story haunted me, even as a young child.  Would I know enough Scripture to survive if I didn’t have a Bible?

This week at The Master’s University, we are celebrating our Global Outreach Week.  The Outreach Office works to educate students to the realities of different people groups and to challenge them to see Great Commission as the vocation of all believers.  So, this week, we are looking at the realities of Bible-less people–those who do not have the Bible in their own language.

What, you say?  Doesn’t everyone have the Scriptures in their language?  NO!  In short, there are about 7,000 living languages in the world today.  And 1,860 languages still have NO BIBLE in their language.  NONE.  NADA.  ZERO.  ZILCH.  That’s a Billion people without the Bible–not even scraps of it.  Did you know that it takes 44 pages to print 1,860 language names single-spaced?  Or that English has more than 900–900– yes, you read that right, 900 translations and paraphrases of the Bible?  Our library alone at TMU has more than 130 English versions.  We English-speakers are Bible gluttons–or at least, we lounge at the Bible buffet–while a Billion people starve for what they don’t know they desperately need.

Dave and Stacey Hare, grads of TMU from more than a dozen years ago, are serving as our speakers in chapel this week.  You can watch their first address Here, and the second one will be live about 9:25 on Wednesday morning on the TMU Facebook Page.  They have finished a first term in Cameroon and are working hard to write the language down, to analyse the discourse, and understand the culture.  You can find some great reflections on missions, ministry, and translation work here at their blog. 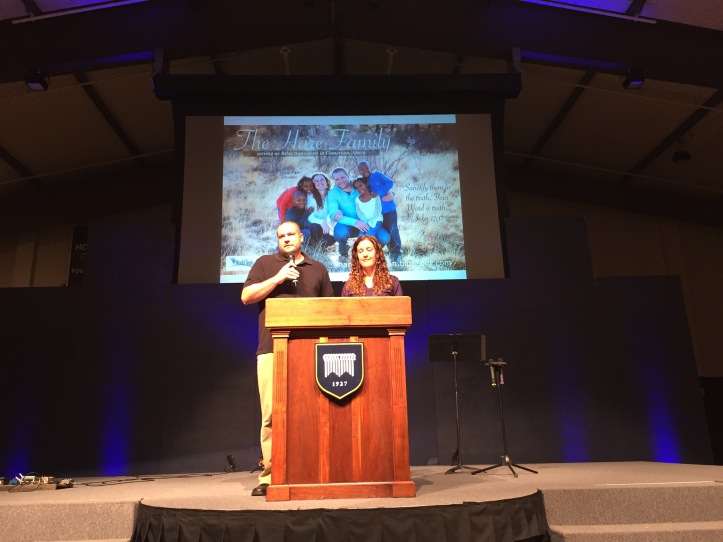 Would you pray with us that the Lord would impact 10 new languages with translators because of this week?  Pray for Bible-less peoples?  And for their translators? Here are some good ideas of how to pray.

We just celebrated 500 years since Luther’s contribution to the Protestant Reformation.  None of that would have happened without access to the Scriptures in the languages of the people.  God help us in these days, that we may not starve in the midst of the feast.